From early childhood I have...

From early childhood I have known only the Christian Science religion. I am very grateful for the firm foundation I gained by regular attendance at a Sunday School, for it has helped me to grow and progress in the study of Christian Science.

A number of years ago a situation arose which was not quickly met. I began to have attacks of asthma. One of my parents, who was not a Christian Scientist, had had this disease for many years. The doctors had said that they could relieve it but that there was no known cure for it. I heard much discussion about the disease during my years of growing up—about climate, season, foods, altitude having a direct bearing on the severity of it.

Send a comment to the editors
NEXT IN THIS ISSUE
Testimony of Healing
Because of my never-ending... 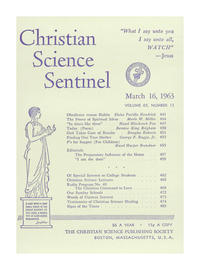