In the Armed Forces of the United States and other countries service personnel when unable to perform their duties must go on sick call, or report to the infirmary. What steps should a Christian Scientist take when he has to go on sick call, because physically incapacitated? He is encouraged, whenever possible, to communicate with the Christian Science Chaplain, Minister, or Representative at his installation before going and request help either from him or from a practitioner of his own choice. When it is impossible for him to communicate with the Field worker, then he may ask his unit Chaplain or a friend to send the message for him.

In times of need, Chaplains, Ministers, and Representatives have been able to take service personnel to their homes for short periods of study and prayer. As a result the personnel have been quickly healed and enabled to return promptly to their military duties. Usually such occasions have come at the close of the workday or on weekends. 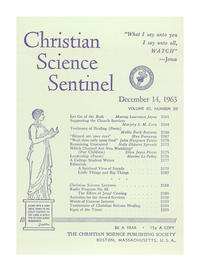