For many years I sought an...

For many years I sought an explanation of life and a logical understanding of the Bible. Having been brought up in a Protestant church, I was familiar with the Bible; but as the years passed, it became more and more a book of inexplicable contradictions to me. It was certainly very beautiful literature; but in poetry and prose it was full of wonderful promises, none of which ever came true in daily experience.

I had read many of the ancient teachings and philosophies, feeling convinced that there must be an answer to this confusion, for I would not believe that an intelligent creator, having made me an intelligent being, had launched me into a universe I was not meant to understand.

Send a comment to the editors
NEXT IN THIS ISSUE
Testimony of Healing
I am very grateful for the wisdom... 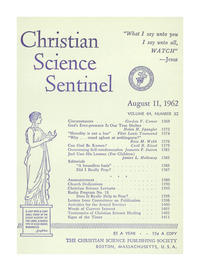