One morning, while at work, I had to use one of the elevators. I tried to pull the gates shut, but one side did not move; so I reached up with both hands and gave it a hard jerk. The gates came together, tearing the glove I was wearing and also the flesh on my hand. I started immediately to declare spiritual truths which I had learned in Christian Science, declaring that man cannot be injured, because he is truly God's perfect idea. I repeated almost everything I had memorized, including the Lord's Prayer and other healing truths from the Bible and from Science and Health by Mrs. Eddy.

For about an hour I really prayed, and the pain left entirely. However, the company for which I work requires that all accidents be reported to the first aid station. The nurse in charge tried to persuade me to go to the hospital and have stitches taken in the hand; but I asked her only to clean it up and put a bandage on it. She finally agreed to do this, but said she wanted to see it the next morning.

Send a comment to the editors
NEXT IN THIS ISSUE
Testimony of Healing
It was over twenty-seven years... 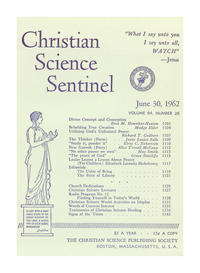