Soon after our marriage, my wife...

Soon after our marriage, my wife was healed through Christian Science treatment of a painful sinus disorder. At that time we knew little about this regenerating and healing religion and did not see the necessity for expressing our gratitude by accepting the opportunity for membership in, and steadfast service to, The Mother Church and one of its branches. Had we been alert then to the joy and reward inherent in helping to fulfill the purposes for which Mary Baker Eddy established her Church, we no doubt would have had a clearer understanding of how health and harmony may be maintained in a young family.

Through the next few years we continued to take advantage of Christian Science activities made available in our community by the efforts of others. We attended services occasionally, and we enrolled our young son in a Christian Science Sunday School. When he was five, the boy became ill with a mastoid condition which did not appear to be yielding to our prayers or to those of a Christian Science practitioner. After several weeks, the child's symptoms became so alarming to us that we dismissed the practitioner, called a physician, and consented to the operation which he advised us was the only means of helping our son.

Send a comment to the editors
NEXT IN THIS ISSUE
Testimony of Healing
Mrs. Eddy tells us in Science and Health... 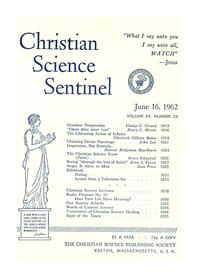