I should like to express my gratitude for the blessings that Christian Science has brought to me and particularly for the cure of a very bad stutter which developed when I first learned to talk. The condition was so bad that I could seldom say one sentence without stammering, and I suffered greatly while at school. I was not able to stand up in class to read or recite aloud, and I even had difficulty in answering questions.

At the outbreak of the Second World War, I joined the Armed Forces and after two years of active service was taken prisoner. I remained in a prison camp for three years, I had in my possession a Bible and a copy of "Science and Health with Key to the Scriptures" by Mary Baker Eddy, and I studied these for many hours each day, reading them from cover to cover many times.

Send a comment to the editors
NEXT IN THIS ISSUE
Testimony of Healing
I shall always be grateful to the... 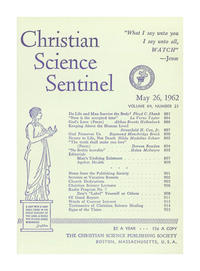