The tape recording of the Tuesday Evening Meeting held in The Mother Church on June 6, 1961, and entitled "Church Growth," is being distributed to branch churches and societies and to informal groups of members of The Mother Church in remote areas in fifty-three countries. In addition to the English tape recording, tape recordings of this meeting are being presented in French and German and manuscript translations in Danish, Dutch, French, German, Portuguese, Spanish, and Swedish. Letters of gratitude and appreciation are being received from all countries.

That the spiritual import of the Tuesday Evening Meeting continues to unfold from year to year is attested by a church in West Germany which writes: "We never thought last year that a meeting could be even more beautiful and uplifting, and yet it seemed to us to be even more inspiring this time; one felt the irresistible progress of Christian Science." 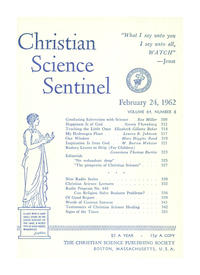