[The above is substantially the text of the program released for broadcast the weekend of December 7–9 in the radio series, "The Bible Speaks to You," heard internationally over more than 800 stations. This is one of the weekly programs produced by the Christian Science Committee on Publication, 107 Falmouth Street, Boston 15, Massachusetts.]

RADIO PROGRAM No. 36 An Answer to Conformity

HOST: Would you like to have someone tell you when you could smile, what sort of clothes you could wear, with whom you must walk and talk? Sounds pretty fantastic, doesn't it? And yet young people often feel this is the price that's asked if they want to be socially accepted by the group.

Life magazine recently published a report which revealed some of the attitudes at a number of top prep schools. Life's reporter heard such statements as these: "You are caught between two poles: the System and what you believe in. Maybe it's taking the chicken way out, but you just don't want to get exposed, so you follow the System. ... You follow rules—build facades—and then wonder who you really are." 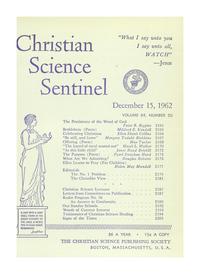