I had been suffering from a disease...

I had been suffering from a disease of the spine for seven years when Christian Science was presented to me in 1950. I had consulted a number of doctors without being helped. They all diagnosed the difficulty as an incurable disease which would be accompanied by progressive paralysis. They said I was going to become an invalid and would no longer be able to work.

It was at this time that the light of Truth first shone for me. I undertook the study of the Bible and of Science and Health by Mrs. Eddy with courage and with the help of a consecrated practitioner, who upheld me by her prayers. I did not understand at first that the use of sedatives was not in accordance with Christian Science, and I continued to take them, having been unable to sleep without them for months. About a month later it was made clear to me that I did not need to take them, and one evening after reading from the Christian Science Quarterly the current Lesson-sermon on Love, which moved me very much, I was able to sleep peacefully without a sedative.

Send a comment to the editors
NEXT IN THIS ISSUE
Testimony of Healing
Although not interested in... 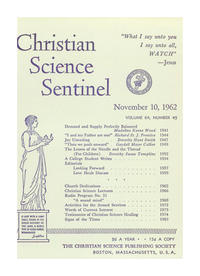