More than forty years ago I turned to Christian Science when life seemed not worth living and received an instantaneous healing of unhappiness and attendant illness. I had known of Christian Science for years through a sister who was an earnest student of it and who became a practitioner. However, until my little world seemed to crumble, my attitude toward Science was that of amused tolerance. When, in my extremity, I asked my sister for help, she, knowing my former attitude, said, "If you have faith enough to ask me for help, you have faith enough to be healed."

That night I had my first normal sleep in months and awoke with a sense of buoyancy and a feeling that the whole world had been made over. I said to my sister, "I don't want just to be healed; I want to know how I'm healed." That day I began the study of Christian Science, and through the years continued study has brought to me and to my family continued blessings. 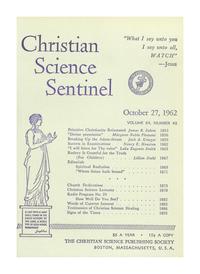