[The above is substantially the text of the program released for broadcast the weekend of March 24-26 in the radio series, "How Christian Science Heals," heard internationally over approximately 700 stations. This is one of the weekly programs produced by the Christian Science Committee on Publication, 107 Falmouth Street, Boston 15, Massachusetts.]

RADIO PROGRAM No. 393 - Your Ever-present Right to God's Help

Our guest is a man who felt this way at one time, but who gained an entirely different outlook. I'd like you to meet Edward Hughes, of Bartonville, Illinois. 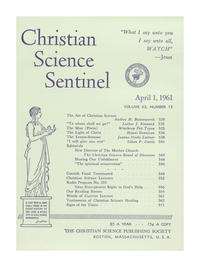