Some time ago I had a very severe...

Some time ago I had a very severe pain in one knee, and the leg became swollen. This condition went on for a few days, and I tried to help myself through prayer as we are taught to do in Christian Science; but there was no physical improvement. So I decided to telephone a practitioner and ask for Christian Science treatment. While talking to the practitioner I felt such a sense of Love's presence that the pain completely vanished even before we had finished talking.

However, the knee became stiff and continued to be stiff for about two weeks. Whenever possible I took the textbook, Science and Health by Mrs. Eddy, and studied it. I knew that the practitioner had done her work and that there was something in my thinking that needed to be corrected.

Send a comment to the editors
NEXT IN THIS ISSUE
Testimony of Healing
When I was a young girl... 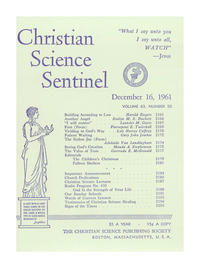