It is with a deep sense of gratitude to God that I submit this testimony telling of some of the benefits I have received from the study of Christian Science. My first healing was that of influenza during an epidemic of it. The publicity given in the newspapers aroused much fear in my consciousness. Because I was a new student of Science, I did not know how to protect myself and I became ill. A practitioner was called, and as a result of her prayers I was able to be about my duties in a few days and was soon free from all aftereffects.

Our son, when quite young, was healed of spinal meningitis after two physicians, one a specialist in children's diseases, told us they had done all they could for the child and that he would live only an hour or two. Christian Science treatment was then asked for and received, and in a short time the child became conscious and began to improve gradually Within weeks he was entirely healed.

Send a comment to the editors
NEXT IN THIS ISSUE
Testimony of Healing
For more than fifty years I have... 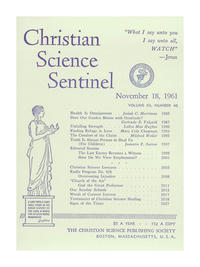