The Trustees under the Will of Mary Baker Eddy announce with pleasure the release of a new album of records entitled "The Children's Talking Book." In this album, beautifully illustrated in full color, are printed selections from "Miscellaneous Writings," including "Angels," The Children's Prayer, and the prayer "To the Big Children"; from "Science and Health with Key to the Scriptures": the Lord's Prayer with its spiritual interpretation, the twenty-third Psalm as interpreted by Mrs. Eddy, and "the scientific statement of being"; and from the Church Manual: the '"Daily Prayer"; as well as the words to Hymns Nos. 207, 254, 304, and 23. Also included are four small records (33⅓ r.p.m.) on which Sunday School children speak and sing these same selections. The four hymns are sung by a group of The Mother Church Sunday School children.

This album, priced at $2.50, is available at Christian Science Reading Rooms or will be sent postpaid by Charles Henry Gabriel, Publishers' Agent, One Norway Street, Boston 15, Massachusetts, U.S.A. 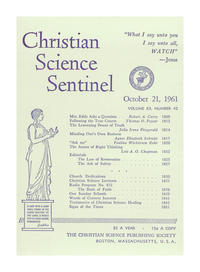