Johnny and the Great Red Dragon

Johnny was very happy at the day school which he attended. He liked his teacher and his playmates. One morning as he and his mother were walking across the lawn towards his school, they were met by his teacher, who said that all the children in the class, except two little girls and Johnny, were absent from school with measles. The teacher was not a student of Christian Science; and because she was sure that Johnny and Mary and Gail would soon have measles themselves, she asked Johnny's mother whether she would like to take him home at once.

Johnny did not quite understand what had been said, but he heard his mother's calm voice saying that it would be quite all right for him to go on to school. He and Mary and Gail had a very happy morning. At twelve o'clock his mother came to take him home. 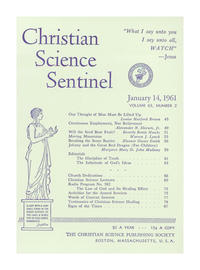