I became interested in Christian Science as a young man just prior to the First World War and a short while after I had arrived in the United States from London, England, where I had made my home. Having been brought up in the Protestant faith in my native city of Hamburg, Germany, and being religiously inclined, I had tried to remain faithful to its doctrines. However, the classes in preparation for confirmation left grave doubts in my mind as to the soundness of some of the teachings, which I did not find in harmony with the Gospels.

This inquisitive state of mind later helped me to lend an open car to some English friends I had met in New York: they told me about Christian Science because I was in great physical trouble. I was plagued with a severe case of eczema, which had spread over my hands, arms, and legs and was giving me no rest. In spite of a rigid diet and a medical prescription, the trouble grew worse instead of better.

Send a comment to the editors
NEXT IN THIS ISSUE
Testimony of Healing
More than thirty years ago I... 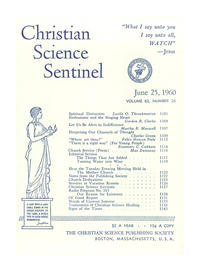