Christian Science has been of...

Christian Science has been of untold help to me and has healed me many times. Not long ago I had an abscessed ear, which had bothered me over a period of a few months. Hearing in the ear had been affected. At various times during this period, I had had treatments from Christian Science practitioners. With considerable difficulty I was able to continue with my work, which took me to various places.

Continued declarations of truth finally brought my complete healing. The truths which most particularly helped me were these from Science and Health by Mrs. Eddy (p. 463): "A spiritual idea has not a single element of error, and this truth removes properly whatever is offensive," and from "Miscellaneous Writings " by the same author (p. 185), "Self-renunciation of all that constitutes a so-called material man, and the acknowledgment and achievement of his spiritual identity as the child of God, is Science that opens the very flood-gates of heaven; whence good flows into every avenue of being, cleansing mortals of all uncleanness, destroying all suffering, and demonstrating the true image and likeness." 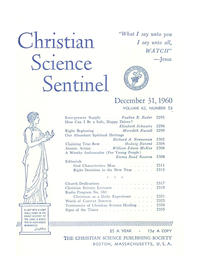