The word "narrow"' often has an unpleasant connotation when applied to someone's attitude toward morals or religion. We may, for instance, visualize the righteous type of religionist, very strict and stern in his adherence to the outward regulations of his religion, while lacking in the forbearance, love, and forgiveness so evident in Jesus' life. Or perhaps we think of the word "narrow" as indicating a way of life devoid of the joy of even innocent pleasures.

Young people may tend to think of someone who does not drink alcoholic beverages and smoke tobacco as narrow in the derogatory sense. They may fear being considered narrow by their friends if they themselves do not indulge these habits. A young married couple were faced with this situation when they became interested in the study of Christian Science. Both of them smoked, and they accepted a few drinks as part of a social evening and a good time. When it became clear to them that these indulgences cannot be reconciled to Science, they desired to relinquish them but were confronted with the argument that their friends would think they were narrow. It disturbed them that they might be considered wet blankets or prudes and be no longer welcome at their friends' parties. 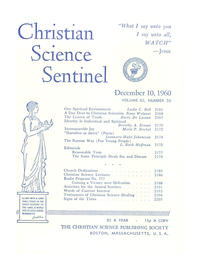