In this column under date of November 10, 1956, an account was given of Christian Science activities at the United States Military Academy, West Point, New York. Since that time there has been further progress.

Send a comment to the editors
NEXT IN THIS ISSUE
Testimony of Healing
When I was mustered out of... 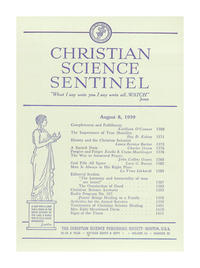