Defeatism is a comparatively recent term for the age-old phase of human belief in helplessness and hopelessness, in frustration, failure, and fear, all of which are inexorably associated with materiality, its mutations and mortality.

The thought of defeatism is first mentioned in the Bible in connection with what Mary Baker Eddy rightly refers to as the legendary account of creation, wherein man is said to be a creature of dust or nonintelligent matter. This is in striking contrast to the first chapter of Genesis, wherein the spiritual truth is stated that God made man in His own image and likeness and that God saw everything He had made and found it to be very good. 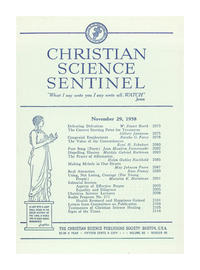