The Mission of Our Periodicals

We read in I Samuel (9:26, 27) that when the prophet Samuel was ready to anoint Saul as the God-appointed king of Israel "they arose early: and it came to pass about the spring of the day, that Samuel called Saul to the top of the house, saying, Up, that I may send thee away. And Saul arose, and they went out both of them, he and Samuel, abroad. And as they were going down to the end of the city, Samuel said to Saul, Bid the servant pass on before us, (and he passed on,) but stand thou still a while, that I may shew thee the word of God."

The mission of the Christian Science periodicals is to publish the Word of God, to proclaim its healing efficacy to mankind, to make known its enlightening, enriching power. To all who will stand still a while to hear their benign and gracious messages will come the unfailing assurance of God's loving care for His children, the encouraging promise that no circumstance of sin or sickness is beyond the Father's willingness and ability to heal. To the listening ear of spiritual receptivity, their angelic words will speak, "Let the unwilling, the unready, the servants of material sense, pass by; but 'stand thou still a while, that I may shew thee the word of God.' " 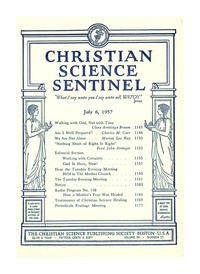