Christian Science came into my life in my early teens. My mother asked a relative who was a Christian Scientist to tell me about this religion. To these two people I owe a debt, because through them I had several years in the Sunday School. However, it was not until later that I really proved that Christian Science is not just a beautiful religion, but the actual way of Life to make one's own and to rely on in every possible human experience.

Among physical healings, one will always stand out, since it involved the overcoming of an overwhelming sense of fear. During World War II, when my husband was stationed in the north of England, our little daughter became seriously ill. In order to satisfy school authorities and her father, who was not a Christian Scientist, a doctor was called. He diagnosed rheumatic fever in a most unusual form and told us that the girl would have to spend from three to six months in bed and that a slow convalescence would be required to take care of aftereffects.

Send a comment to the editors
NEXT IN THIS ISSUE
Testimony of Healing
For the past ten years I have been... 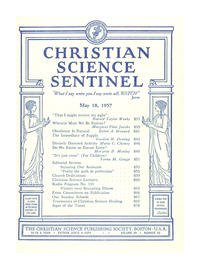