In December, 1953, I became ill with what I believe would have been diagnosed as pneumonia accompanied by heart trouble. The condition persisted for almost four months, during which time I was beautifully sustained by Christian Science treatment. For about two months it was practically impossible to lie down at night; so I sat up in bed and studied Science and Health and Mrs. Eddy's other writings until I finally went to sleep in an upright position.

At first the loss of sleep disturbed me greatly, and weakness resulted, but I finally realized that what I most needed was not unconsciousness in sleep, but a real, spiritual awakening. I began to thank God that I was awake and could learn more about Him and my relationship to Him.

Send a comment to the editors
NEXT IN THIS ISSUE
Testimony of Healing
As a young mother I turned to... 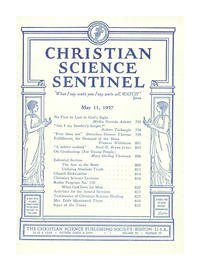