"WHICH OF YOU CONVINCETH ME OF SIN?"

Both the Old and the New Testament are replete with experiences from which we may profit. Scriptural teaching is practical in the solving of present-day problems because it is based on demonstrated immortal wisdom. When, for instance, his opponents attempted to ensnare Christ Jesus, they only evidenced how erroneously they were influenced and mesmerized by the carnal mind. This same antagonist is still to be overcome by the Christ, Truth, in human experience. Could we do better than emulate the moral courage of our Way-shower in his reply to his critics as recorded in John (8:46), "Which of you convinceth me of sin?"' The word "convince," as used in the King James Version of the Bible, means "convict" in the original Greek.

The Master was never overcome by fear of a mind, presence, or power apart from God. He was never guilty of being a disbeliever in God's omnipotent law of universal harmony, for he always acted in obedience thereto. Personal considerations were not Christ Jesus' motives for action. He knew the true selfhood of man and never identified error as personal or powerful. When Pilate asked (John 19:10), "Knowest thou not that I have power to crucify thee, and have power to release thee?" Jesus' answer was, "Thou couldest have no power at all against me, except it were given thee from above." As evidence of his assurance that God had not delivered him into the hands of the enemy, Jesus continued, "Therefore he that delivered me unto thee hath the greater sin." 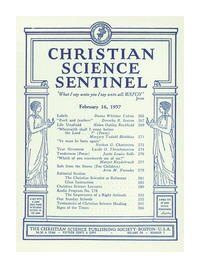