During my school days I decided...

During my school days I decided that it would be proper for me to become a clergyman of the Protestant denomination of which I was then a member. This decision was made after I had consulted with some of my older friends who were interested and who approved the idea. I studied with this purpose in view for a number of years.

However, during these years of study I gradually realized that my conception of God was very vague and that instead of learning more clearly of Him and of the kingdom of heaven, I was becoming less able to define these terms to my own satisfaction. I knew that if I could not define them for myself, I could not define them for others. Eventually, with sorrow and reluctance I gave up my purpose. A few years later I entered our military service, and I was commissioned a second lieutenant of infantry in 1904.

Send a comment to the editors
NEXT IN THIS ISSUE
Testimony of Healing
In gratitude to patient and loving... 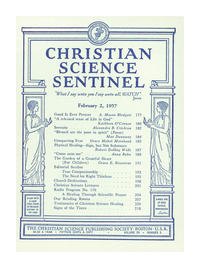