I became interested in Christian Science over twenty-five years ago when a sister was healed of tuberculosis. During these years I have relied entirely on this Science for healing and have been blessed in many ways through the study of this wonderful truth.

When our oldest daughter was in the first grade of school, she severed the end of her little finger in some large swinging doors at school. When I saw the finger, I was quite disturbed; so I called a Christian Science practitioner for help, which was lovingly given. One treatment only was required. I was no longer disturbed, the child was free from any pain or discomfort, and she was back in school the next day. Several weeks later the finger had healed, and the nail had completely grown out again.

Send a comment to the editors
NEXT IN THIS ISSUE
Testimony of Healing
I am sincerely grateful to God... 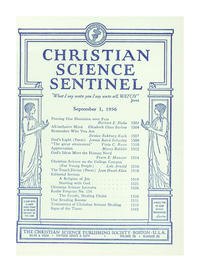