My mother was a student of ...

My mother was a student of Christian Science, and I had the blessed privilege of attending the Sunday School during my early years. Later I attended a branch Church of Christ, Scientist. However, as time went on I became apathetic in my study and attended church services less and less frequently.

Shortly after the birth of our daughter a condition developed in my right eye which, in addition to being extremely painful, affected my vision. I went to an optometrist, who told me that the vision in the affected eye was very weak and that he could do nothing for me in the way of fitting me with glasses. He recommended a series of electrical treatments to try to clear up the inflamed condition which he said existed. After two or three treatments, which did me no good, I realized that my real need was for spiritual light; so I turned back to Christian Science, asked the help of a consecrated practitioner, and began to study in earnest.

Send a comment to the editors
NEXT IN THIS ISSUE
Testimony of Healing
Along with multitudes of others... 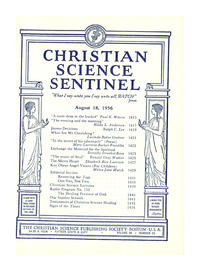