Mankind searches constantly for a cause for some observed effect. The ultimate answer to such a search is found only in the true record of the creation of the universe as given in the Bible. In the first Chapter of Genesis it is related that God created the universe and all that is therein, including man in His image and likeness. We read (verse 31), "And God saw every thing that he had made, and, behold, it was very good." The Apostle John declared (1:3), "All things were made by him; and without him was not any thing made that was made."

These two Biblical statements establish conclusively the fact that God, being the creator of all that was made, is the only Creator or cause. God is Spirit, and man is His spiritual idea. In "Science and Health with Key to the Scriptures" Mary Baker Eddy makes this clear and concise statement regarding cause (p. 207) : "There is but one primal cause. Therefore there can be no effect from any other cause, and there can be no reality in aught which does not proceed from this great and only cause." 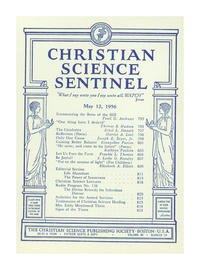