God hath not given us the spirit...

"God hath not given us the spirit of fear; but of power, and of love, and of a sound mind" (II Tim. 1:7). This quotation has often been a great help and comfort to me, and I am grateful to Christian Science for the overcoming of fear, especially the fear of infectious diseases. I am most grateful for the fact that both our daughter and son went through their childhood without having any so-called children's diseases for more than a few days. The only ones encountered were whooping cough and mumps, from both of which they quickly recovered.

One healing for which we have been grateful was that of an unsightly birthmark on our son's arm. It completely covered his elbow. The doctor, whom we consulted before we knew of Christian Science, said that it was of a type which would spread and that it must be burned away by treatment with an acid. The child was so young that the doctor said he could remove only half of the birthmark at a time. During the removal of the first half, the little boy suffered so much that we decided to postpone the removal of the other half until he was older.

Send a comment to the editors
NEXT IN THIS ISSUE
Testimony of Healing
It is with a heart filled with gratitude... 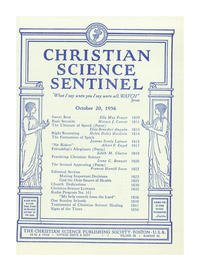