A friend said to me, "You can be a Christian Scientist now, because you have good health; but if anything ever went wrong with you, you would have to go to a doctor." A healing I had experienced a few days previously disproved this assertion.

At noon one Saturday I felt a bit of pain and weakness in one hip. The discomfort was so slight that I gave it an opportunity to develop by ignoring it, instead of instantly denying it with the truth of being. By night I was in extreme pain and could get around only by holding to one piece of furniture after another. By then I was roused and gave myself a Christian Science treatment. After a night of misery, however, I knew I had to have help. At five o'clock the following morning, Sunday, I asked a Christian Science practitioner for treatment, pointing out that I wanted to go to work the next morning. I feared that the condition, whatever it was, might be so serious that the longer it was allowed to continue, the harder it would be to overcome. Also I felt that the fewer the people who knew of it and worried about it, the better. Hence my great desire to go to work the next day.

Send a comment to the editors
NEXT IN THIS ISSUE
Testimony of Healing
Many years ago I became interested... 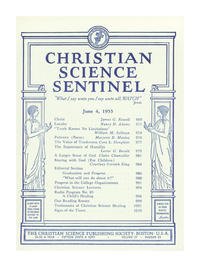