Branches of The Mother Church throughout the Field are rejoicing in growth and constantly unfolding activity, as evidenced by reports and letters received each year. An opportunity for these interesting reports to be shared with the Field is provided for in Article XIII, Section 1, of the Manual of The Mother Church by Mary Baker Eddy, which calls for "general reports from the Field" as a part of the Annual Meeting. Letters are welcomed from the churches and societies telling of their forward steps and enriching experiences during the past year. Excerpts are read from as many representative reports as the time allotted to this part of the program permits.

In order that reports sent by the churches and societies may be considered for possible use at the Annual Meeting of The Mother Church to be held on June 6 this year, it is desirable that they be in the hands of The Christian Science Board of Directors not later than April 15, and as much earlier as possible. 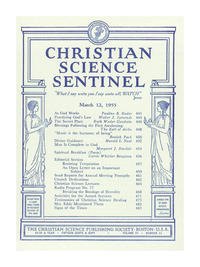