In 1913 I was ill with tuberculosis. The doctors gave me one year to live. I was the only child of a physician and had had innumerable medical treatments. A conversation with a Christian Scientist brought an instantaneous healing of constipation, from which I had also suffered. This healing started me in the study of Christian Science. As my understanding of God grew, my health returned, and I became a normal person. It has since been my privilege to experience many healings—physical, social, and economic.

One healing occurred as follows. I had eaten something which I later learned was believed to be poisonous, and as a result I had lost my sense of taste. Careful examination of my thinking revealed to me that I had allowed criticism and a sense of annoyance to enter my consciousness. When these were corrected my sense of taste was restored, and I was entirely free.

Send a comment to the editors
NEXT IN THIS ISSUE
Testimony of Healing
"It is a good thing to give thanks... 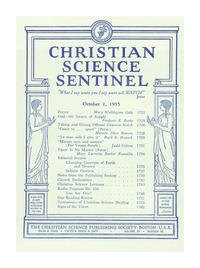