One often hears students, when nearing the end of their training for a particular career, make remarks such as, "I know I shall never finish the course in the specified time; even if I do, I shall never get the job I should like," and so on. Some declare that they could never work where the circumstances were so and so, the chief a certain type, or the position such and such. Students of Christian Science would do well to ask themselves, "Who is this 'I' that seems to struggle so strenuously with timidity and incompetence on the one hand and so rigidly outlines its terms and conditions on the other?"

In "Science and Health with Key to the Scriptures" Mary Baker Eddy writes (p. 588), "There is but one I, or Us, but one divine Principle, or Mind, governing all existence;" and she further says (pp. 465, 466), "Principle and its idea is one, and this one is God, omnipotent, omniscient, and omnipresent Being, and His reflection is man and the universe." Is it not clear from our Leader's statements that the "I" who is declaring its inability to do this or that, or who is voicing belief in its own self-sufficiency, its likings and choosings, cannot be the real man, who, as the reflection of the one Ego, the one omnipotent Mind, God, is continually expressing its infinite intelligence, opportunity, and contentment? 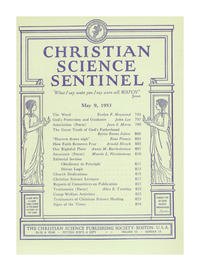