DUTIES AND REWARDS OF STEWARDSHIP

In a broad sense we are all stewards, discharging our responsibilities according to our light. While the early meaning of the word stewardship appears to have been the management of the household or the estate of another, the meaning of the term has been expanded through centuries of use to apply figuratively to other positions of responsibility and trust.

Biblical history records many well-known instances of stewardship. Jesus found in them apt illustrations for his teachings. Thus in the twenty-fifth chapter of Matthew is found the well-known parable of the talents, in which it is related that a master gave to each of three servants talents, "to every man according to his several ability; and straightway took his journey." The parable continues with an account of the uses to which each of the servants put his talents, reciting the master's approval of the two who had been active in his behalf in the words, "Well done, thou good and faithful servant: thou hast been faithful over a few things, I will make thee ruler over many things," and his condemnation of the unfruitful one, who "digged in the earth, and hid his lord's money." 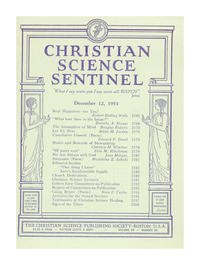