Christian Science found me when the doctors had informed my husband that if he did not move me to a higher and drier climate I could not possibly live longer than three months because I had tuberculosis in its last stages. At this time a dear friend of mine had just returned from visiting a relative who had been healed of a similar condition. This friend said she knew nothing about Christian Science except that it had healed her relative and she felt sure that it could help me. She got the address of our local Reading Room, where my husband went to borrow the textbook, "Science and Health with Key to the Scriptures" by Mary Baker Eddy. I knew nothing of acquiring the services of a Christian Science practitioner.

Before I began reading the textbook, whenever I had a coughing spell I did not take a spoonful of medicine as had been prescribed, but instead turned up the bottle and drank from it. My medicine bill was greater than my grocery bill.

Send a comment to the editors
NEXT IN THIS ISSUE
Testimony of Healing
A short testimony cannot tell of... 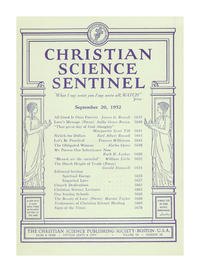