When I was a small child, my mother was told by her physician that an operation would be the only means by which her physical condition might be improved. The ailment was one which she had had from her youth. The thought of an operation frightened her; so she permitted Christian Science treatment to be given by a friend who was a Christian Science practitioner. She was completely healed during the first treatment, and to the amazement of her family she was able to eat everything that was served for dinner that night, something she had not been able to do since childhood.

In gratitude my parents enrolled me in the Christian Science Sunday School, where I was taught the fundamental truths of divine Science. Since then, I have used this Science in my schoolwork and later in business experiences and in establishing a home of my own.

Send a comment to the editors
NEXT IN THIS ISSUE
Testimony of Healing
When I was about a year old and... 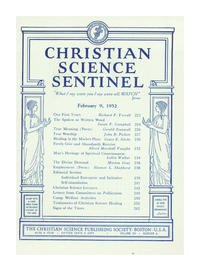