For many years the testimonies...

For many years the testimonies appearing in our periodicals have given me much inspiration, and I should like to tell of three of the many healings which I have experienced through the teachings of Christian Science. The first occurred a number of years ago. I was in a very serious automobile accident; the brand-new car in which I was riding was completely demolished. My face was so badly cut that the thought was expressed that I would be disfigured for life. This was very frightening to me. However, after talking to a practitioner on the long-distance telephone, I decided not to have the cuts sewed and to depend entirely on God for my help. This was my first real stand in Christian Science. Fear and shock were quickly met, and the scars soon faded away as I began to grasp the truth that my real selfhood was not material and had never been in an accident; so there could be no aftereffects from that which really had never happened. On page 300 of the Christian Science textbook, "Science and Health with Key to the Scriptures," Mrs. Eddy tells us, "The temporal and unreal never touch the eternal and real."

The second healing was of severe bilious attacks and headaches which kept me in bed for days at a time. As they became more frequent and severe I prayed earnestly in the words of the Psalmist (Ps. 139: 23, 24), "Search me, O God, and know my heart: try me, and know my thoughts: and see if there be any wicked way in me, and lead me in the way everlasting." Shortly after this, following one of the attacks, I was led to look up the word bile in the dictionary. The definition which caught my attention was "ill-humor." I thought this could not possibly relate to me, for I believed that I was very good-humored. Although a member of my family had been indulging in social drinking, and this had annoyed me very much, I had arrived at the point where I could hold my tongue most of the time.

Send a comment to the editors
NEXT IN THIS ISSUE
Testimony of Healing
For the college student Christian Science... 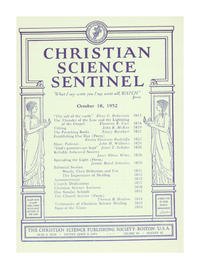