David spent his childhood on a farm, enjoying the pleasures and sharing the responsibilities of helping to care for the animals. However, Sundays always found him in his place in the Christian Science Sunday School, where he learned of God and man from the Bible and from the Christian Science textbook, "Science and Health with Key to the Scriptures" by Mary Baker Eddy. Sometimes the teacher told stories from the Bible.

David's favorite story was about a boy who was also named David. This David took care of his father's sheep. He trusted in God and had courage and strength even in times of great danger. He had overcome wild animals that had attacked his sheep, and so he was not afraid of the powerful Philistine giant, Goliath, who was threatening the armies of the children of Israel. He said to King Saul, "The Lord that delivered me out of the paw of the lion, and out of the paw of the bear, he will deliver me out of the hand of this Philistine" (I Sam. 17:37). And Saul replied, "Go, and the Lord be with thee." God was with him, for with only a sling and a stone and trust in Him David overcame the giant and saved "the armies of the living God." 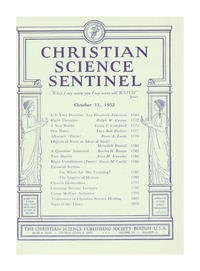