PERRY A. B. JESSUP

In her book "The First Church of Christ, Scientist, and Miscellany" Mary Baker Eddy states (p. 240), "I now repeat another proof, namely, that Christian Science is the higher criticism because it criticizes evil, disease, and death—all that is unlike God, good—on a Scriptural basis, and approves or disapproves according to the word of God" The word criticism, when analyzed, is found to indicate judgment, faultfinding. As one reasons with this word criticism, the fact is revealed that faultfinding is a promiscuous type of judging, and judgment is comparing by a certain standard, measure, or rule. Now Jesus stated (John 7:24), "Judge not according to the appearance, but judge righteous judgment." This admonition established the fact that judgment or criticism itself is not an evil, but that it should be righteous. It gradually becomes clear, then, that it is the standard, or yardstick, which we use in criticism that determines its righteousness or Godlikeness.

Are we using the right rule? Is our motive pure? Do we not often use our own opinion of something as the yardstick? Is the criticism based on a personal concept? Is not this judging "according to the appearance"? This type of thinking does the world no good. It could not help or heal anyone. The Christ, Truth, alone heals mankind. What then is the true, the higher criticism?

Send a comment to the editors
NEXT IN THIS ISSUE
Article
"WHAT HAVE I TO DO?" 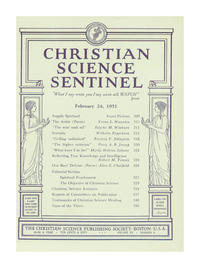