One of Christ Jesus' most effective ways of awakening his hearers to a realization of their relationship to God and their divine inheritance was to make it clear to them that they were children of the one, or only, Father. In the Old Testament there are very few references to God as Father, and this would indicate that the concept of God's fatherhood was only slightly developed at that time, since it found so little expression. But Jesus advanced the thought of God's fatherhood by presenting God as the Father of each one, and in a way that excluded a material sense of fatherhood. He said (Matt. 23:9), "Call no man our father upon the earth: for one is our Father, which is in heaven."

Jesus' presentation of God as Father was both understandable and acceptable to those who followed him. He was able not only to present God as Father, but to prove to his listeners through the healings he brought about that the realization of sonship with God, the Father, clothed the one who possessed it with divine authority—an inheritance of spiritual power. In explanation of this spiritual power he declared (John 5:19), "The Son can do nothing of himself, but what he seeth the Father do: for what things soever he doeth, these also doeth the Son likewise." 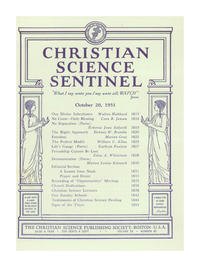