Since I began the study of Christian Science,...

Since I began the study of Christian Science, about twenty-eight years ago, I have had many healings. Some of these were accomplished through my own work and some through the help given me by practitioners. One healing that stands out in my thought was of a growth on my face. At first I was not alarmed, but as it became noticeable and began to cause comment, I realized I could not let my friends who were not interested in Christian Science think that this Science could not cure all inharmony. I worked earnestly to know that God's man is free from blemish. Through the faithful work of a practitioner I was led to look into my consciousness and uproot thoughts of hurt, self-pity, criticism, and condemnation. As my thinking improved I became less fearful, and in a short while the growth dropped off.

Another healing for which I am very grateful was of a very painful foot injury. My foot was so swollen that I could not put my weight on it. I telephoned a practitioner for treatment, and by the next morning I could not tell which foot had been hurt.

Send a comment to the editors
NEXT IN THIS ISSUE
Testimony of Healing
"Behold, I send an Angel before... 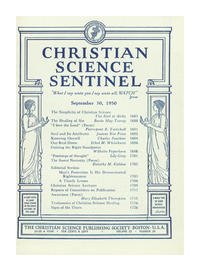