I wish to express gratitude for the...

I wish to express gratitude for the healing of a nervous breakdown. This healing was brought about a number of years ago through the teachings of Christian Science. It was not an instantaneous healing; in fact, my condition seemed to grow steadily worse over a period of three years. This trouble was accompanied by long periods of depression, discouragement, self-pity, self-condemnation, and despondency. So long as my thought was centered on self, I made no progress towards overcoming the difficulty. But when I finally succeeded in turning thought away from myself, away from what I believed to be my troubles, looking steadfastly to God until I grasped something of the fact that "the Lord he is God; there is none else beside him" (Deut. 4:35), my healing was rapid.

However, I did not gain this understanding until in my agony I began to realize something of what Isaiah had in mind when he said (2:22), "Cease ye from man, whose breath is in his nostrils: for wherein is he to be accounted of?" and of what Paul meant when he said (Eph. 4:22-24), "Put off ... the old man, which is corrupt according to the deceitful lusts; and be renewed in the spirit of your mind; and ... put on the new man, which after God is created in righteousness and true holiness."

Send a comment to the editors
NEXT IN THIS ISSUE
Testimony of Healing
I should like to take this opportunity... 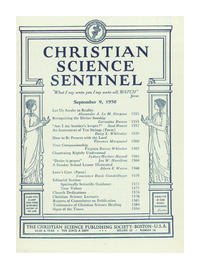