NO SHORT CUT TO TRUTH

What would be thought of a student of mathematics who procured a textbook which changed some of the rules in an attempt to make the study easier? Would it really do that? Or would it lead him away from the truth he was seeking, prevent him from solving mathematical problems, and finally result in confusion and disappointment? Would anyone attempt to learn a foreign language from a book which professed to simplify the grammar by changing, let us say, some of the irregular verbs into regular ones, or that from sheer ignorance omitted an important rule or possibly added something wholly ungrammatical? Would one ever be able to speak the language correctly? In fact, could one call such a book a grammar? The answers to all these questions are obvious.

But is not anyone who tries to study Christian Science with the aid of books which change certain to make them more palatable to the reader, or which err in their statements while professing to offer a clearer presentation of Truth than is provided in the genuine Christian Science literature, in a similar situation? Such literature may sometimes appear to be a simplification, but in the long run it is always more complicated. Truth is very simple. It is the erroneous which is complicated. If Christian Science as given to us by our Leader, Mary Baker Eddy, was not simple, it could not be practiced by children. But they are doing exactly this continually. 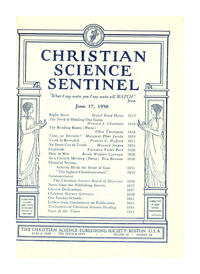