The record of God's spiritual creation, found in the first chapter of Genesis, ends with a declaration of finality: that He "saw every thing that he had made, and, behold, it was very good" (Gen. 1: 31). God saw His creation as finished, complete, and perfect. No mist, or false sense, such as that which obscured this creation to human view and resulted in the material, imperfect sense of creation recorded in the second chapter of Genesis, could change or distort the Maker's vision of what He had created—revealed out of the infinitude of His own self-completeness.

In the Christian Science textbook, "Science and Health with Key to the Scriptures," Mary Baker Eddy writes (p. 335), "Spirit, God, has created all in and of Himself." Spirit, God, creating all—revealing all as the manifestation of Himself —beholds this creation as forever intact, unimpaired by faulty human concepts known as change, accident, or finite will.

Send a comment to the editors
NEXT IN THIS ISSUE
Article
ARE WE DEPENDING ON SPIRIT OR MATTER? 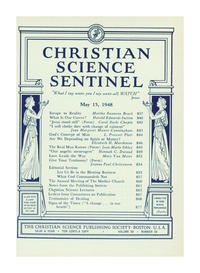