I should like to take this opportunity to express my gratitude for Christian Science and our beloved Leader, Mary Baker Eddy. The harvest I have reaped as a student of Christian Science has truly been bountiful. As a child I contracted a so-called incurable eye disease. At that early age I did not realize the difficulties which the deformity would bring about in my relations with other children. As I grew up I found myself treated differently from other children. My mother, who had just become interested in Christian Science, worked with me to realize my true dominion and selfhood, and she engaged a practitioner to help me. I gradually improved. Meanwhile I tried to demonstrate a fuller understanding of Christian Science, for, as stated in "Science and Health with Key to the Scriptures" by Mrs. Eddy (p. 162), "Christian Science heals organic disease as surely as it heals what is called functional, for it requires only a fuller understanding of the divine Principle of Christian Science to demonstrate the higher rule."

My thought grew clearer, and I became firmly convinced of the perfection of man. Although I no longer realized any imperfection, the people I met daily did not see me in the same divine light. I went to the practitioner, and although I was only a schoolgirl, I asked him to let me pay for my treatments out of my own allowance and savings. I felt that this was a right step. A little while after I assumed responsibility for the practitioner's help, the eye condition cleared up completely. A few months after this wonderful healing, which proved the completeness and perfection of man's true being, the money that I owed the practitioner was also forthcoming.

Send a comment to the editors
NEXT IN THIS ISSUE
Testimony of Healing
It is not easy to convey by means... 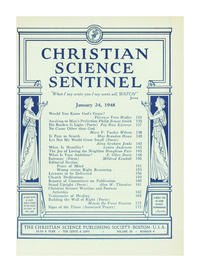