About forty years ago, after a...

About forty years ago, after a severe attack of what was called pleurisy and pneumonia, I was told that the strain had affected my heart and I must be careful. That was the beginning of years of illhealth. Twice more I had pneumonia, also catarrh of the nose and throat, recurring hay fever, and sciatica, which finally became chronic. The heart condition grew gradually worse until, over twelve years ago, after I had literally "spent all that [I] had, and was nothing bettered" (Mark 5:26), I was taken to a hospital for a thorough check-up to see whether or not anything could be done for me. The verdict was that the heart trouble, which was supposed to be incurable, had almost run its course; that the end was near and nothing could be done about it. Therefore my wife, a medical and surgical nurse, was asked to take me home, the hospital being overcrowded. During the ten-day period I spent in the hospital I witnessed the passing on of three persons with the same ailment I had.

I had had a mother who taught her children from the Bible from the time they learned to talk, and I had attended Sunday School regularly, becoming a church member when eighteen and a Sunday School teacher at twenty-one. I was therefore well acquainted with the letter of the Word. I also became acquainted with interpretations of it when during a period of about fourteen years I lived in various small towns in the East. During this period my wife and I attended any church that was convenient, and I became much interested in the different creeds and doctrines. But all seemed to have, like the church I was brought up in, many contradictions and unanswerable questions. I had not heard of Christian Science, except from those antagonistic to it, and I did not know of the existence of the textbook, Science and Health by Mrs. Eddy. At this critical time in my life, however, one came who had long been a friend of the family and had, a short time before, turned to Science. She said, "Now that you have tried everything else, why not try Christian Science?"

Send a comment to the editors
NEXT IN THIS ISSUE
Testimony of Healing
Twenty-one years ago my mother... 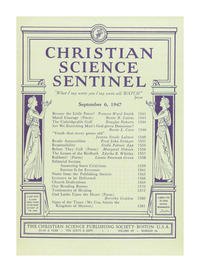