A Soldier for Peace

Dick was nearly eight years old, and had been going to the Christian Science Sunday School since he was two. During this time he had learned many wonderful truths. Often he was able to solve problems by applying what he had learned, but sometimes his mother helped him.

One day his mother told him there was a way he could be a soldier for peace, a way he could guard against error. Then she read from "Science and Health with Key to the Scriptures" by Mary Baker Eddy the following sentences (p. 392): "Stand porter at the door of thought. Admitting only such conclusions as you wish realized in bodily results, you will control yourself harmoniously." 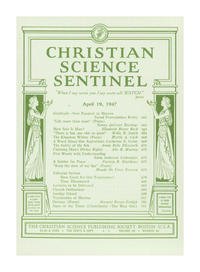