"The certainty of the words of truth"

With what serenity does one who speaks the truth face friend or foe! Note the calmness, the assurance, of a witness in a suit at law whose testimony unquestionably is based on certain simple, provable facts. Grilling cross-examination cannot shake him, cunning legal tactics cannot befuddle him. He is just telling the truth. His feet are planted on the rock. And should he not know that the truth must prevail, no matter what contravening evidence dishonest mortals may put forth? There would be fewer miscarriages of justice if more people in the legal profession were learning to know God as divine Truth, the source of all harmony, power, and law, and therefore were assured that even the human sense of truth, like the light, must be victorious in banishing its opposite.

A lawyer, a student of Christian Science, related the following incident: His client, on trial for a misdemeanor, was directed by the judge to stand up and receive his sentence. The lawyer was satisfied as to the defendant's innocence, but apparently had not been able to prove it. It seemed unthinkable that this guiltless man should have to suffer because of another's lies. The lawyer heard the judge announce his decision. The accused was sentenced to serve one year in jail. The lawyer bowed his head in prayer. With his whole heart he reached out to the mighty God of truth. He declared that nothing was present but Truth; that Truth, like light, must always dispel darkness; that Truth is the only power and presence; and that justice and law could not be divorced from Truth, divine Principle. There was a moment's silence in the court; then the judge cleared his throat and said that he had decided to change his dictum about a jail sentence. Instead, he imposed a suspended sentence, which meant that after a certain period of good behavior the sentence would be lifted. How truly did the great Apostle to the Gentiles say (II Cor. 13:8), "We can do nothing against the truth, but for the truth." 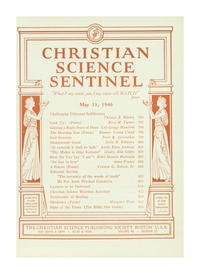