One Sunday morning a student of Christian Science was called to serve as a substitute teacher for an advanced class of boys in the Christian Science Sunday School. They were wide-awake young fellows, prone to ask very definite questions on the Lesson. At first the teacher feared she might not be able to answer their questions intelligently, because she had not made any special preparation other than her daily study of the Lesson-Sermon. But almost instantly she recognized that such an argument was only aggressive mental suggestion, claiming power. Realizing that because God is the Teacher, He would only provide the right answers to question, she went joyously to the class.

The Lesson subject was "Are Sin, Disease, and Death Real?" The boys were very attentive and brought many helpful facts to the class that morning. Suddenly one of them said: "I have never understood absent treatment. Will you explain it?" Turning instantly to God for the answer, the teacher replied, "Prayer is answered where the need is." The boy repeated it after her, thought about it a moment, and accepted it as a satisfactory answer to his question. 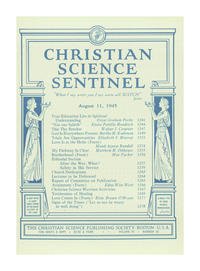