We Also Can Win the Peace

"Chaplain, if the enemy ever gives us time for another service, would you talk on 'When can mankind put up its sword?'"

This challenge came from a hard-bitten soldier on a day when we were in battle on the western front. By anyone's standard he was a brave man, who had gone repeatedly into combat during his two years overseas. Obviously, he was no mere speech-making patriot, and yet when quiet came again to the sector, he repeated his request, and urged his reasons: "It seems to me that back of this thought is significant meaning, very different from what a pacifist might think. And until we are willing to ponder its implications we never can have peace." 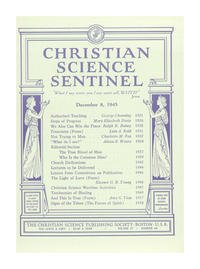